Last year Timothy M. Williamson began working with two partners to resolve a problem that had been running up costs and hurting efficiency at a high tech production facility. The problems consisted of hold ups, labor costs and down production due to the unavailability of parts and operations manuals for manufacturing equipment on the shop floor. Their solution involved connecting a cloud-based data system to mobile devices via scan code so that field service technicians could instantly access manuals, schematics and service/technical bulletins. 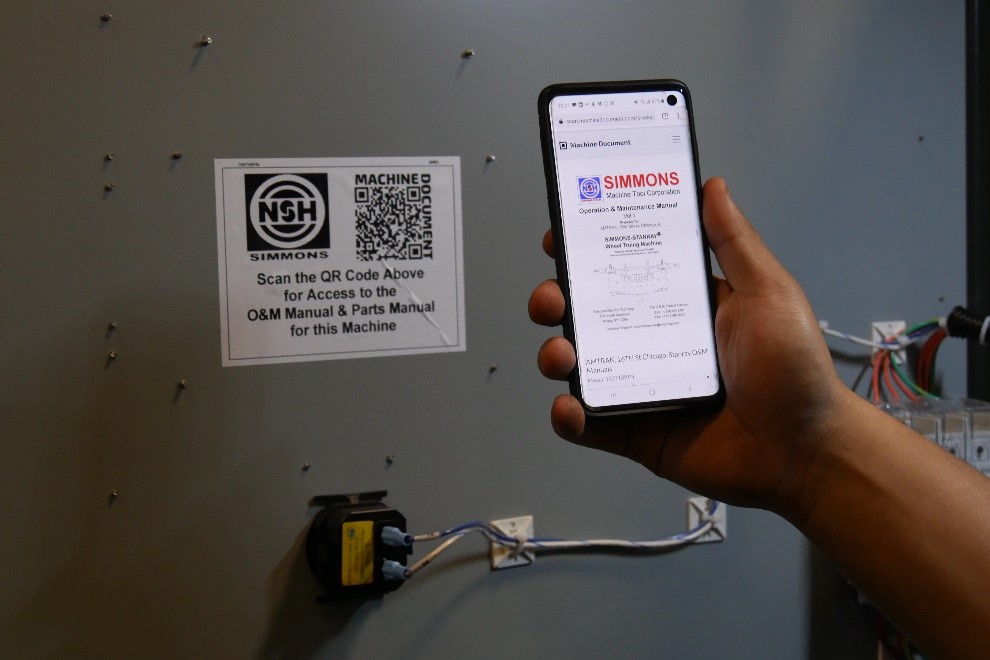 By the end of 2019, the software solution for their startup, QTH 54, was ready for testing. Through Empire State Development’s Division of Science, Technology, and Innovation (NYSTAR), Williamson, in Lackawanna, was introduced to Michael Lobsinger, the senior vice president of the Center for Economic Growth’s Business Growth Solutions (BGS) unit. Lobsinger saw beyond the scan code to the whole system and how, over the course of time, it could save original equipment manufacturers (OEMs) and end users a substantial amount of time and money. In August Lobsinger started making introductions to companies that fit QTH 54’s market, and in January he connected Williamson with David W. Davis, the president of Simmons Machine Tool Corp.  an Albany manufacturer of machine tools for railway wheel set maintenance and production.

If Simmons is able to implement this technology on all of their new and existing equipment, they expect to initially save thousands of dollars annually on documentation costs going forward. Taking this further, Williamson estimates that field service technicians spend an average 15 minutes tracking down documentation for machinery per service job, and QTH 54’s technology reduces that to two minutes or less. This adds up quickly given that field service technicians time bills at between $100 and $150 per hour. That could save Simmons clients thousands of dollars annually. There is even more money to be saved from reducing downtime.

“For every minute a revenue rail vehicle is not moving due to maintenance or repairs, the lost opportunity expenses can mount into the tens or hundreds of thousands of dollars, if not more. Downtime in any industry is very expensive,” said Simmons President and COO David William Davis.

Prior to meeting Davis and his administrative team in Albany in February, Williamson had thought a lengthy OEM manual was 1,300 pages and had a file size of 10 megabytes. But the Simmons’ team laughed at the assumption and informed him their manuals ranged from 5,000 to 20,000 pages and ran up to 700 megabytes. In fact, each piece of machinery Simmons produces comes with two 3” binders covering parts documentation and a third 3” operations manual binder. Richard Segerstrom, Simmons’ technical writer, said this type of solution was “not on our radar,” but he quickly saw “it added up to be something that would be helpful.”

Shortly after that meeting in February, the coronavirus pandemic broke out and QTH 54 spent the next several months improving its software with feedback from Simmons. Some new features included a PDF auto-divide app to divide large PDFs into chapter size bits, the ability to lock and require an access code to any section of a manual with sensitive documents, and the ability to issue bulletins to different machines that might share a component. Simmons started attaching QTH 54’s scan code labels to its new machinery last summer. The scan codes, unlike typical QR/scan codes that are just a URL link to a webpage, serve as unique access keys to interact with the cloud-based information system.

“They love it. They love the quick availability,” Simmons Customer Service Manager Carol DeThorne said of the Simmons customers who have used the QTH 54 scan codes on machinery in the field.

Going forward, Simmons will affix the QTH 54 scan code labels on the power cabinet door of all new machinery, and it will offer it to some customers with equipment already in the field. Williamson is already in talks with other OEMs for QTH 54’s app and software solutions, and he expects the startup to have hundreds of clients within a year. The startup’s name is an amalgamation of two popular culture references: “QTH” is a Ham Radio Q (Question) Code that stands for “What is your location?” and “54” references to the television show, “Car 54, Where are You?”

“This all would have taken much, much longer had it not been for Michael Lobsinger’s immediate understanding of what we were accomplishing in field service and down time savings, as well as for support from LaunchNY, Fuzehub and CEG,” Williamson said.

CEG BGS has a long history of supporting entrepreneurs connect with potential customers and manufacturers improve efficiencies, and QTH 54 is an example where both were served and benefited. BGS also assists startups with receiving grants and loans as well as mentoring, access to resources and facilitates and connections to potential investors. BGS also provides technology acceleration guidance to identify new markets or partners and prototyping support.