Pharmacquired: Where are all the deals?

longside resolutions, the new year tends to come with biopharma acquisitions. The first two months of 2018 brought four deals worth $1 billion or more. The same was true in 2019, which barely got off the ground before a mammoth bid for Celgene was announced.

The early days of 2020, by contrast, have notched just one billion-dollar deal.

Analysts and consultants are mostly waving off this period of lighter activity. "We don't think a lack of deals over a couple of months is really anything notable," said Phil Nadeau of Cowen & Co. "It's probably just a bit of a dry period for no reason at all.​"

And yet, the slow start could seem oddly timed. It doesn't fit with the early and splashy dealmaking seen in recent years, nor does it align with some investment bank expectations that drug companies might try to ink deals sooner in the year to avoid possible disruptions from the U.S. presidential election.

But perhaps most glaring: the downswing comes as many large biotech and pharmaceutical companies are seemingly in need of M&A.

Two of the biggest biotechs, Gilead and Biogen, are under pressure to acquire because they haven't convinced investors that their experimental drugs can make up for problems on the commercial side of the business.

Among the pharmas, Sanofi, Eli Lilly and GlaxoSmithKline are trying to play catch up in the industry's hottest research area, oncology, and have shown a willingness to speed up that process through buyouts. Swiss drug giants Roche and Novartis, meanwhile, paid hefty premiums for footholds in the rapidly evolving gene therapy field.

Even Vertex and Merck & Co., which are considered to be in strong financial and competitive positions, turned to M&A several times last year to seed themselves for future growth.

"It's clear that, given the growth rates among the large companies in the industry, they have to keep filling their pipeline through acquisition, partnership or in-licensing," Nadeau said. 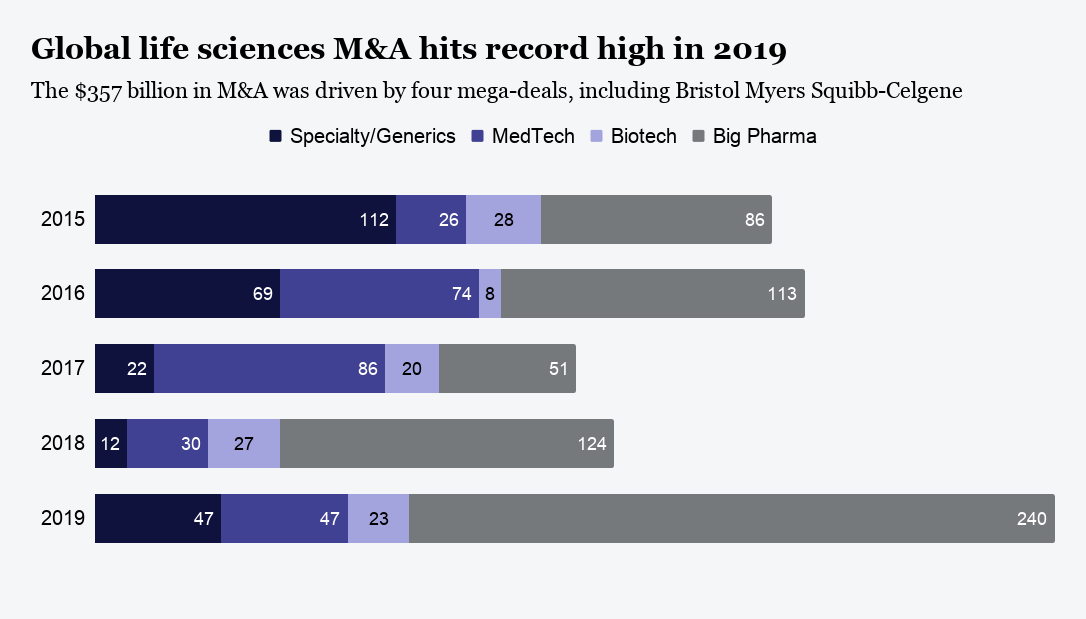 With buyers still on the lookout, industry followers predict 2020 will deliver a healthy level of M&A in spite of the early drought.

What they don't foresee, however, is this year being defined by a mega-deal like the last two were. Instead, bolt-on deals in the $5 billion to $10 billion range will be a "sweet spot" for large pharma acquirers, according to PwC.

Companies hold ample resources to support such deals too, as EY estimates the life sciences industry has more than $1 trillion at its disposal for deals. Notably, that's after a record-setting 2019 in which the industry spent north of $350 billion on M&A.

"There was so much moving and shaking that happened last year. And for me, I just feel like the underlying activity is still there. It just hasn't reached the surface yet," said Glenn Hunzinger, U.S. Pharmaceutical and Life Sciences Deals Leader at PwC.

If and when the activity surfaces, it's likely to target rare disease treatments, cell and gene therapy, and cancer drugs, with the latter proving particularly attractive. A recent Jefferies analysis found two-thirds of small- to mid-sized biotechs that got a cancer drug approved since 2010 were later acquired.

Many potential buyers, though, are in more comfortable financial positions now than they were even a couple years ago, and may not be as open to a less-than-perfect fit when considering a deal.

"Growth has returned to the large cap space, partially through acquisitions, and free cash flow across a number of large-cap companies has never been higher," said Kennen MacKay, an analyst at RBC Capital Markets. These companies now "have the luxury of time on their side, and they can be a little bit more selective."

That's especially true with regard to pricing, according to MacKay, who said the current lull in M&A may have something to do with a rebound in biotech stocks. The XBI, an exchange traded fund of about 130 biotechs, is up about 20% since hitting a relative low point in October. The rise also comes after multiple years in which cancer and gene therapy-focused biotechs have sold for high double-digit and sometimes triple-digit premiums.

Nadeau from Cowen, conversely, sees valuation as less of a barrier.

"Occasionally you do hear business development executives or former management teams talk about how valuation has gotten rich and they don't see attractive targets at a right price," he said. "But on the other hand, when you get these business development folks in private, offline, they'll admit that valuations are very flexible too. And if there's a strategic deal that a company wants to do, they can make any valuation work."

On his end, Nadeau isn't reading too much into 2020's slow M&A start. He guesses it's either due to happenstance, or because some of the deals that might have been inked this quarter were tied up early. Between October and December there were at least nine biopharma acquisitions, including five valued at more than $2 billion.

Peter Behner, global transactions leader for EY's Health Science & Wellness business, also doesn't envision the quiet period will last much longer. Whether in pharmaceuticals or other industries, companies don't just go dormant after a productive year of dealmaking, he said.

"I don't have a great explanation," Behner added. "At the same time, I don't have much doubt that the year should be a solid year."