Thousands of college students are in the process of heading home for the Thanksgiving break, even as public health experts warn against travel for the holiday amid exponential growth of COVID-19 cases in the United States.

According to the College Crisis Initiative, a research project at Davidson College, few institutions have announced post-Thanksgiving exit plans. Those that have may recommend students be tested before leaving campus, but fewer still require it. After the break, they also may be keeping the majority of students off campus until next year.

The campuses of the State University of New York are among a small number of institutions that are mandating testing as part of its Thanksgiving break plan. Testing is currently underway across dozens of campuses, with students required to test negative for COVID-19 within 10 days before leaving. Students were encouraged to take their test as close to their departure date as possible, with individual campuses coordinating testing schedules.

"The health experts said you need to wind down your semester after Thanksgiving break and then go all remote because you don't want people traveling back and forth in the cold months," SUNY Chancellor Jim Malatras told ABC News. "We don't want to send our students home, possibly infected." 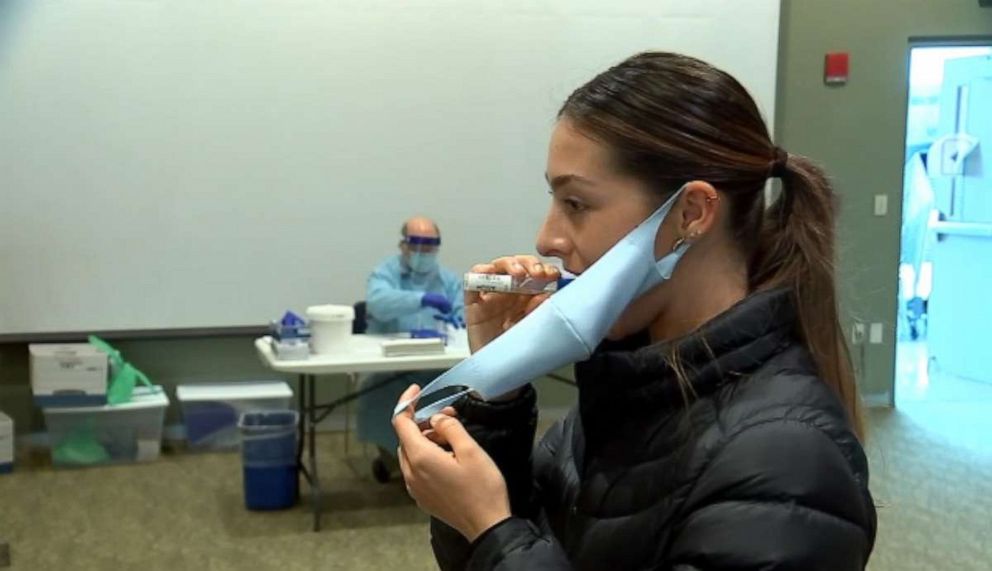 WABC
Students are required to be tested for COVID-19 before leaving SUNY campuses.

Most students won't return in-person until next year. The winter term will be fully remote, and the start of in-person learning for the spring semester was recently pushed back to Feb. 1, to help reduce additional risks during flu season.

SUNY has not been immune to outbreaks across its 64 campuses. A handful of its schools have had to temporarily pause or end in-person learning for the fall. Notably, SUNY Oneonta pivoted to all-remote learning in early September after more than 700 confirmed cases of COVID-19 among students, largely driven by on- and off-campus parties, officials said.

Shortly after, SUNY announced that all its colleges and universities will be required to implement a testing program to detect COVID-19 cases on campuses, and it crafted a uniform compliance document.

"I felt that we needed to bring a little more rigor to the process, and more uniformity to the process," said Malatras, who was named chancellor in late August. "Every campus dealt with infractions against their codes of conduct differently. But what you saw there was an uneven application was leading to bad results on some of our campuses."

Currently, the rolling seven-day average positivity rate across SUNY campuses is around .9%. Statewide, that number is closer to 3% -- among the lowest in the nation. Malatras points to high compliance among students and SUNY's testing regimen to getting the system to this point.

"COVID still exists in the community. You're seeing an uptick everywhere, and you're gonna have it," he said. "It's how do you mitigate it and manage it in a proper way. You need high compliance, and you need a smart way of monitoring the virus. You monitor it through testing."

SUNY has been among the "most aggressive in the country" on its protocols, Malatras posits, "partially because New York was one of the earliest- and hardest-hit states." 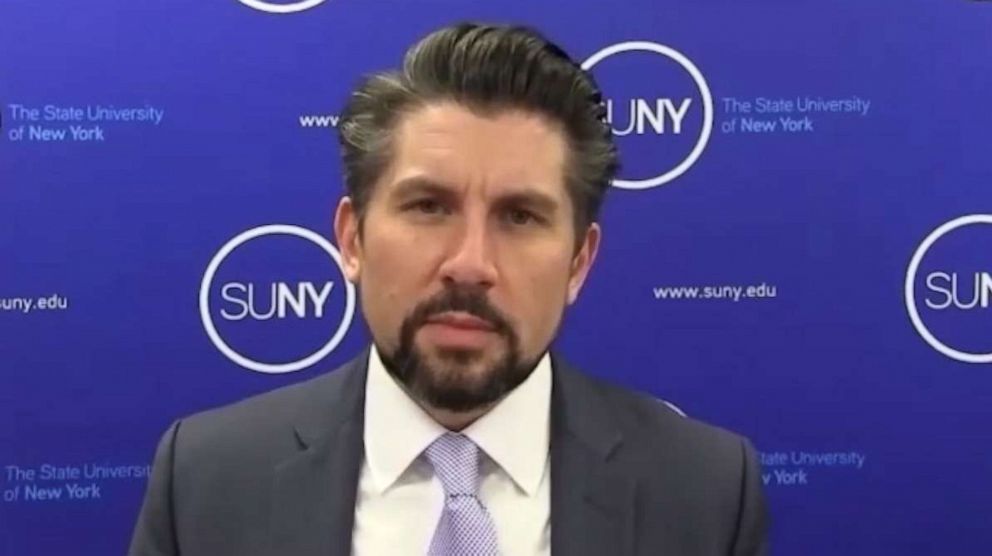 Malatras addressed some criticism that the policy "infringes on students' rights" and is an attempt to "hold students hostage" in a recent New York Daily News op-ed.

"None of it is true," he said, noting that by state health law, any person who tests positive for COVID-19 must isolate for 14 days. Campuses are also staying open for students that are choosing not to leave for the remainder of the semester, he said.

Each SUNY campus must make accommodations for students to isolate, he told ABC News. The local health department can also sign off on students leaving campus to isolate elsewhere, he said.

Students, who have undergone regular testing throughout the semester, have responded well to the Thanksgiving policy, he said.

"It's good, they give us enough time and they work with everyone," SUNY Purchase student Kristen Lambert told New York ABC station WABC while getting tested for COVID-19 before Thanksgiving break.

Zionah Campbell, a student at SUNY Brockport, told Rochester ABC affiliate WHAM earlier this month, "I like knowing that we're getting tested, so that we feel safe." 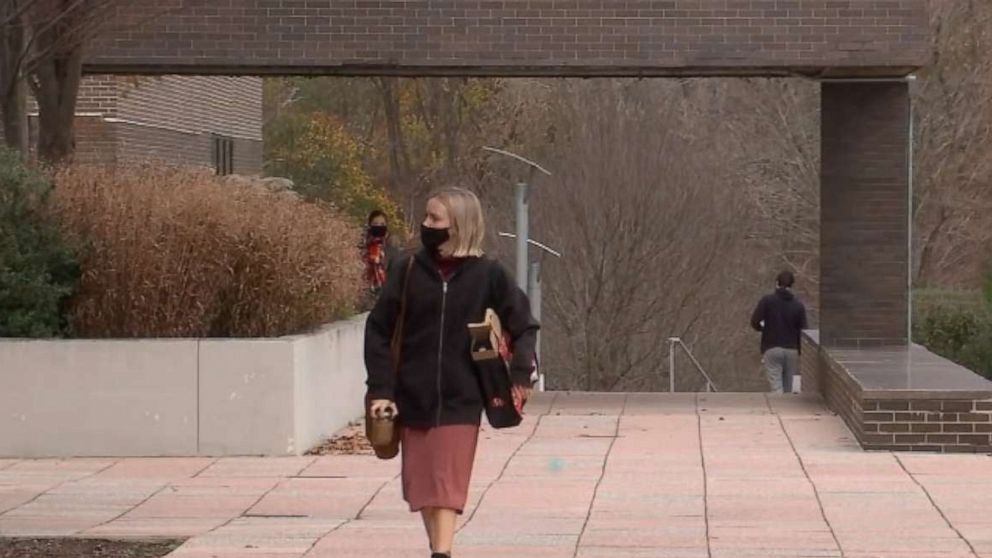 WABC
SUNY Purchase is shifting to remote learning after the Thanksgiving break.

The school was encouraging students to leave early for Thanksgiving break after testing negative after discovering a COVID-19 cluster.

"The fact that we could learn that we're fine could protect us or save us," said SUNY Brockport student Layla Jacobs told the station.

With most of the population off-campus and not undergoing regular COVID-19 testing after Thanksgiving, SUNY is considering having its Food and Drug Administration-approved saliva test available to those outside the institution during that time, Malatras said.

Come the spring semester, returning students must complete a seven-day quarantine before they arrive on campus, at which point they also will be tested for COVID-19, officials said.

Spring break has been canceled across SUNY institutions as well to limit the potential spread of the virus.

For right now though, travel over the upcoming holiday is a pressing concern for health professionals, with the Centers for Disease Control and Prevention advising that people stay home this Thanksgiving.

Testing can help lower the risk of bringing the virus home, said Dr. John Brownstein, an epidemiologist at Boston Children's Hospital and an ABC News contributor. "But there's going to be risk," he said.

"Any amount of travel, and additional contacts that people have, is going to lead to transmission," he said.

For schools that plan to go primarily remote for the winter and send students home, the American College Health Association recommended that they remind students that "the test only reflects one point in time, there can be false negative results, and, in some cases, the virus may be contracted during travel." It also advised students to consider getting a test after traveling and to quarantine for the first 14 days after arrival.