The FDA is offering a fuller account of what went wrong at Emergent BioSolutions’ Covid-19 manufacturing facility in Baltimore, where the cross contamination of J&J and AstraZeneca vaccines led to the discarding of about 75 million vaccine doses.

CBER director Peter Marks released a memo on Saturday with new specifics, making clear up front that no vaccine manufactured at this plant has been distributed for use in the US yet.

The issues at the site first came to light in a pre-EUA inspection for AstraZeneca last September, when the agency says it uncovered crowded manufacturing areas, inadequate quality assurance support, and several issues related to laboratory controls, according to the memo.

Manufacturing of the J&J vaccine at the site began in November, and by December, production for both the J&J and AstraZeneca vaccines were in full swing. Those producing each of the vaccines used a common weigh and dispense area, which became even more hectic as full production ramped up, resulting in increased waste in the latter part of December 2020, FDA says.

The agency returned for a second pre-EUA site visit in February, and it was then that the agency raised questions about the site’s personnel changes and new hires in quality and manufacturing.

On March 26, J&J notified FDA that they had detected AstraZeneca vaccine virus in one J&J batch, which was produced during a period when Emergent implemented measures to handle increased waste production.

“It was concluded that most probable contributing root cause was that the bioreactor media prepared for use in the cell expansion process at that time was contaminated in the common weigh and dispense area through contact with the waste path for materials from Area 3 (AZ manufacturing area),” Marks wrote.

That contamination, which later was found in five total batches of the J&J vaccine or about 60 million doses the FDA recommended discarding, also triggered a for-cause inspection in April, which resulted in a Form 483, and a halting of production at the site. 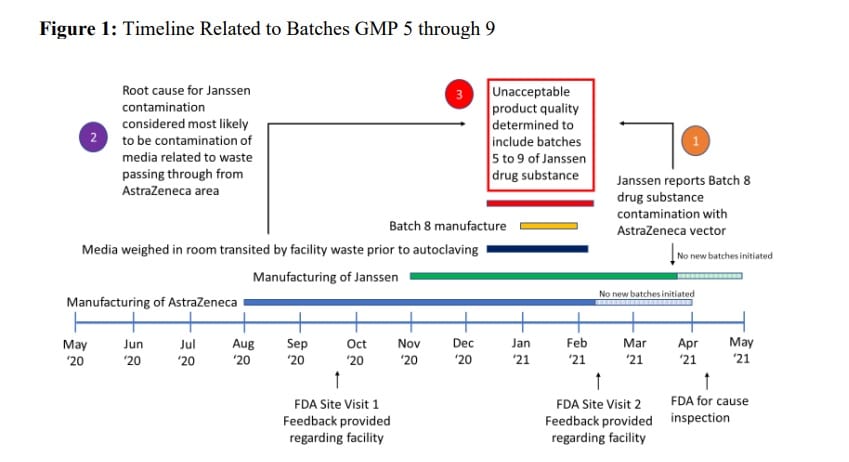 “These observations indicated that the facility had not been operating in a manner that was in compliance with current good manufacturing practice,” FDA says. “There is no evidence that contamination of the vaccine, even at a low level of contamination, would have no impact on the safety and effectiveness of the vaccine.”

But for two other batches, which FDA said can now be used, the agency noted that they were produced “prior to the overloading of the facility’s capacities and the transit of waste in the area that led to the cross contamination.”

In an effort to help regulators in other countries that may wish to make their own judgment on the suitability of these two batches for use, the FDA is providing full access to all available information regarding the manufacturing conditions at the Emergent facility during the relevant time period.

With the permission of J&J and Emergent, FDA intends to share the FDA Form 483, an establishment inspection report (which has not been made public), and CBER’s analysis of the two batches so they would have full access to FDA’s thinking and full transparency.